The curse of a B2 level might sound like a title of an F-rated horror movie but it’s a very real thing. In fact, it affects most language learners,

What is the curse of a b2 level (aka the language learning plateau)?

The language learning plateau is a phenomenon describing one’s inability to progress past the intermediate stages of language learning (i.e. a B1/B2 level). Typically, the main reasons are using inefficient learning strategies, or not using any learning system at all.

Let’s break down step-by-step why a B2 level is a final station for most language learners and what you can do to fix go beyond this mark. Time to break that curse.

What’s a B2 level is all about

What? You thought I would skip a dry, boring and theoretical part? No way! That’s where all the fun is!

Let’s take a look at requirements which one would have to meet in order to be classified at a B2 level. They are a part of the Common European Framework of Reference for Languages.

Description of a B2 level (B2 INTERMEDIATE)

At this level, you can:

Brief explanation: this level can be depicted as a FULL conversational fluency. You can have real conversations with native speakers about a variety of subjects.

Expected conversational depth level: you can discuss things at quite a deep level.

Expected vocabulary depth: you can convey most of your thoughts but you still, for the most part, lack precision. Compared to a B1 level, you can discuss more topics with more precise vocabulary.

Still, any topic that differs from typical, conversational standards will probably throw you off.

English proficiency in the world

Now that you know what a B2 level is all about, let’s take a look at the level of English proficiency in different countries around the world. It’s only natural since this language is still the most popular choice. Our starting point is the EF English Proficiency Index. For brevity’s sake, I will skip the part where I lambaste the reliability of those results.

Countries with the highest English proficiency

Here is a list of countries that were classified as the ones with “very high proficiency” i.e. a C1-C2 level. Pay very close attention to the top dogs. Almost every country in the top 12 has either English as an official language (e.g. Singapore) or it’s a Germanic-speaking country. 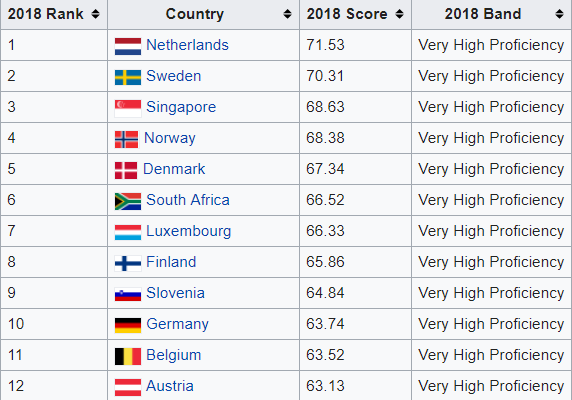 Why is it important? If you’re learning a language which is similar to your native tongue, it will be CONSIDERABLY easier for you to master it. Since English is also a Germanic language, it’s not difficult to notice a pattern here.

Of course, there are other factors at play here but this is the most important one for me from the memory standpoint. The way information familiarity modulates your working memory and increases your learning capacity can’t be ignored.

A good example is my mission from a couple of years ago where I learned Czech from scratch to a B1/B2 level in about 1 month., even though my learning system at that time was far from perfect. Yes, I specialize in memory, so I knew what I was doing but I also already spoke Polish, Russian and German. Those languages helped me establish my initial familiarity with Czech vocabulary at about 80%.

Now it’s time for countries whose English proficiency can be characterized as about B2 level. 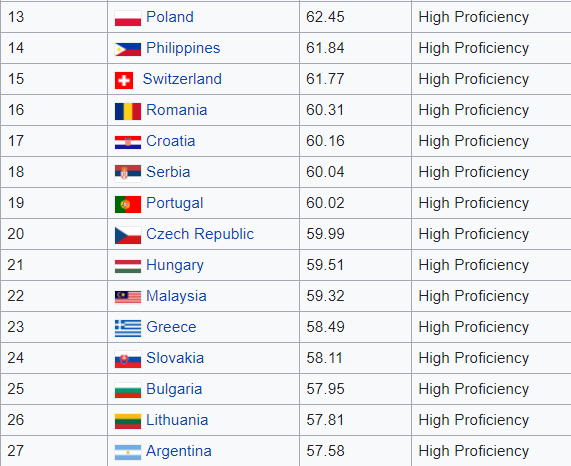 As you can see, once we drop outliers like the top 12, the level drops to a B2 level and below. But let’s not stop there.

Here is an excerpt from one of the official Polish reports about German Proficiency in Poland. Let’s keep in mind that we’re talking about self-evaluation here of people who probably wouldn’t be able to describe language requirements for any level. The reality, in other words, is less rosy.

In other words, the amount of German learners who claim they have mastered this language amounts to about 16%.

In different reports, the number 20 is the reoccurring theme. It seems that only less than 20% of learners of any language get past a B2 level. That is of course if you believe that these numbers are reliable.

Scientific studies are less forgiving in this department.

From that, we can only conclude that students who achieve a C1 are also relatively low (read more about in The Handbook of the Neuroscience of Multilingualism).

I rest my case. Let’s move on.

1. No learning strategy and no system

One of the most surprising facts about how people learn is that most of them have no organized system of learning. You might think that’s an exaggeration but I assure you it’s not.

Here is an excerpt from a recent study (Schimanke, Mertens, Schmid 2019) about learning strategies at a German university.

To get a better insight on how students actually learn, we have conducted a survey among the students of our university (HSW – University of Applied Sciences) about their strategies and learning behaviors.

Overall, there were 135 students participating in this survey from all 6 semesters and between 18 and 31 years of age. 68.1% of the participants were male, 31.9% female.

Only very few of them deliberately make use of learning strategies, such as spaced repetition or the Leitner system. 94.8% of the participants just repeat the learning topics randomly to have them available during a test.

The terrifying thing is that we’re not talking about a bunch of clueless people without any education. We’re talking about bright individuals who will shape the future of their nation.

And yet, almost all of them rely on something I call a let’s-hope-it-sticks strategy. It’s nothing more than spitting on a wall and hoping that something will set. But it rarely does, right?

You can read, reread and cram all you want. Most of the knowledge you gather this way will be forgotten by the end of the next week.

There can be no effective learning if you’re not optimizing your repetitions.

Passive learning can be a very effective learning tool provided that you’re already at an advanced level (especially a B2 level and higher). It can also be relatively useful if, for one reason or another, you are already familiar with a language you want to master (e.g. because it’s a part of the same language family). However, passive learning is a terrible tool for language rookies.

The body of research shows that you need to repeat a piece of information (unintentionally) between 20 and 50 times in order to put it into your long-term memory (i.e. be able to activate it without any conscious effort). Other studies quote numbers between 7-60.

I will let it sink in!

That’s a lot. Of course, the number varies because it all depends on your background knowledge, emotional saliency of words and so on but it’s still a very big number.

Let’s delve into its consequences.

Everything works if you have lots of time

Because it’s almost guaranteed that you will amass a sufficient number of repetitions (7-60) of the words which occur in a language with a frequency of 98%! But what if you want to really master a language. Or two. Do you believe that you will be able to pull that number of repetitions for the words which occur with a frequency of about 2%? Of course not.

Think of any rare word from your native tongue like “cream puff” or “head physician”. How often do you hear them in your daily life? Not that often, right? And that’s the problem. C1-C2 levels consist of rare words like these. That’s why your chances of getting there if your default learning style is passive are very thin. Unless you have 20 years of spare time and are willing to spend most of your waking hours surrounding yourself with a language. 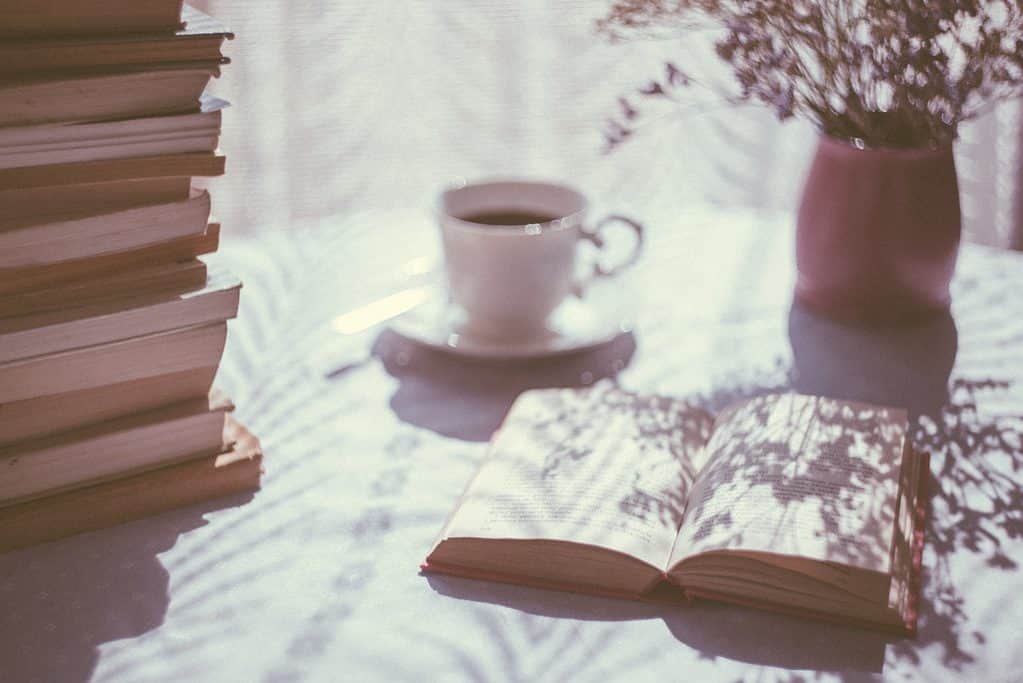 Photo by freestocks.org on Unsplash

Below you can find some findings which closely echo the results I have obtained from my experiments.

Horst, Cobb and Meara (1998) specifically looked at the number of words acquired from a simplified version of a novel, The Mayor of Casterbridge, which had 21000 running words. The novel was read in class during six class periods. It was found that the average vocabulary pick-up was five words.

Lahav (1996) carried out a study of vocabulary learning from simplified readers. She tested students who read 4 readers, each one of about 20 000 words, and found an average learning rate of 3–4 words per book.

The above survey indicates that reading is not likely to be the main source of L2 learners’ vocabulary acquisition. If most words were acquired from reading, learners would have to read about as much as native children do – that is, a million words of text a year. This would require reading one or two books per week. If, however, teachers can expect only small quantities of reading, then word-focused activities should be regarded as a way of vocabulary learning.

Vidal explored incidental vocabulary acquisition from L2 listening (2003), and compared gains from listening with reading (2011). These studies analyzed the effect of a large number of variables (e.g. frequency of occurrence, predictability from word form and parts) on learning. Knowledge gains of 36 target words were measured with a modified version of the Vocabulary Knowledge Scale, on which learners could effectively score 0 to 5.

Out of the maximum score of 180, readers scored 40.85 (22.7%) on the immediate post-test and 19.14 (10.6%) on the one-month delayed test. Listeners scored 27.86 (15.5%) immediately after listening and 14.05 (7.8%) one month later. The main finding is that both reading and listening lead to vocabulary knowledge gains, with gains from reading being much larger than from listening. An effect of frequency occurrence (1, 2, 3, 4, 5, or 6 occurrences) was found in both modes but this was considerably stronger in reading. More repetitions were needed in listening (5 to 6) than in reading (2 to 3) for it to have a positive effect on learning.

At the risk of repeating myself, I would like to stress one more time that your learning capacity is affected by your background knowledge. If you’re a Frenchman learning Spanish, the aforementioned numbers won’t apply to you.

At the same time, there are just a few studies around which test long-term retention of vocabulary for almost any method. That’s a pity because 3 months is a cut-off point proving that words have truly been stored in your long-term memory. The studies quoted above also share this problem. Retesting the students of the above experiments at a 3-month mark would surely yield much worse, and realistic, results.

Anyway, the point I would like to drive home is that passive learning is an ineffective language acquisition tool for beginners.

The curse of a b2 level – how to get unstuck 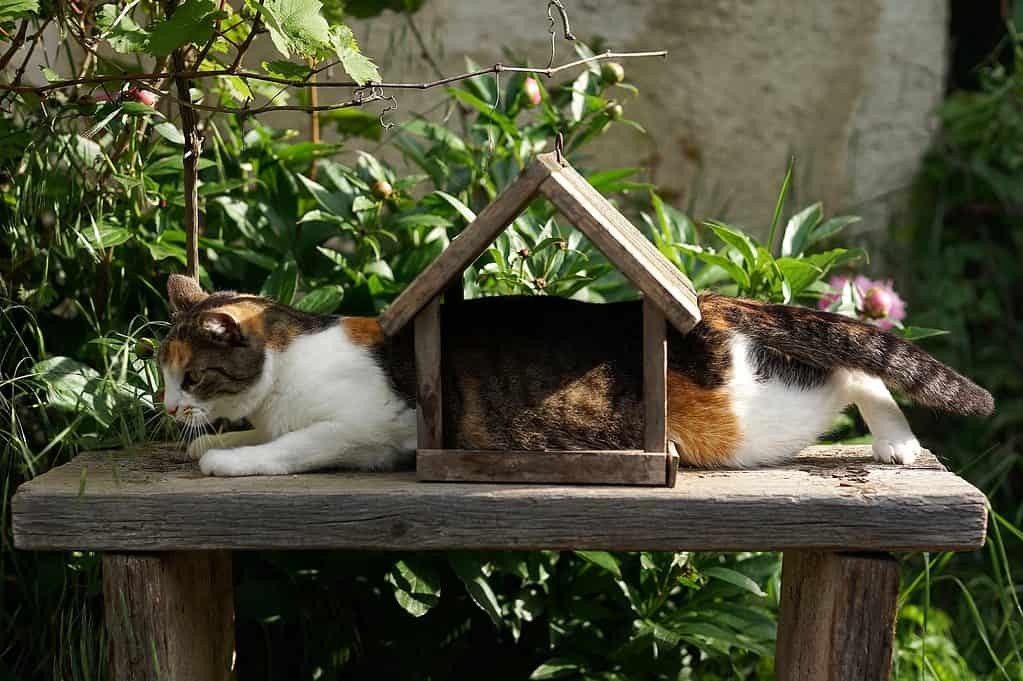 Photo by Tomas Tuma on Unsplash

The most important element you should concentrate on is to develop some kind of learning system. Ideally, it should encompass the following strategies:

A B2 level is achievable to almost anyone as long as you pursue your learning goal with dogged persistence. However, moving past this level requires from you the use of systems that will allow you to focus heavily on rare words which make up about 2-3% of a language since it’s almost impossible to master them just by learning organically (i.e. reading, listening and talking).

If you stick to smart learning methods, you will surely overcome this hurdle.