How To Extend Your Vocabulary and Memorize More Words With Swearing

I know, I know. The mere word “cursing” causes knee-jerking of all of those pure at heart. And that’s why I have to warn you before you move further into the text.

The article contains quite a bit of profanities/obscenities/vulgarisms/expletives. So to say it briefly – it’s not for the faint-hearted.

But to be clear – I have no intention of shocking anyone. But I do believe that cursing might be a VERY useful tool for memory improvement if used the right way. So approach everything you’re about to read with the open mind.

Ok, you have been warned.

Let’s start with the fun fact. Do you know that “fuck” and “shit” are among the 75 most often spoken words in American English? That’s right. Obscene language seems to be an inseparable and indispensable part of every language (Foote & Woodward, 1973).

Not shockingly, according to the Association for Psychological Science, an average person in United Stated utters about 80-90 swear words per day. It amounts to even 3,4 % of all the words used daily.
That’s why it’s hard to achieve full fluency without knowing at least a couple of swear words.

What’s amazing, in almost every country, there are individuals who have taken it to the extreme.
They seem to communicate only with help of swear words and grunting! But let’s treat them as a separate case.

As an anecdote, I can tell you about my good friend from Russia (and an amazing polyglot). He has a very interesting approach to vulgarities of all kinds. Every time when he wants to start learning some language or get the taste of it, he starts with swear words.

If I’m not mistaken, currently he can swear in over 20 languages. He might not be able to quote Shakespeare in Greek but he surely can tell you to “go f**k yourself” in this language.

Anyway, that goes without saying that obscene language is avoided and treated as a taboo.
It’s nowhere to be found as a part of any language learning curriculum. Even though it is an important element of everyday speech.

Although, it’s hard to blame anyone for this state of affairs. Probably not that many people would be willing to attend the school where they would have to repeat after teacher “f*ck you!”.

So it seems that dirty language is doomed to stay in the shadows of every language learning curriculum.
But that’s good news. The forbidden fruit always grabs your attention.

Because such a language is characterized by EXTREMELY intense emotions. And exactly these emotions can help you to memorize new vocabulary much faster than before.

But first, let’s take a look at advantages of learning such a language.

Why You Should Learn How To Swear In Your Target Language

1) So you don’t make silly (and inappropriate) mistakes.

The line between saying the word you intend to say and the one you really utter might be very thin.

My colleague at my previous, corporate work had to present some data in front of our English supervisors. She tried to be very professional and business-like. But she couldn’t understand why the managers were chuckling all the time.

Of course, not ALL the time. It only happened when she was saying the word “account”. Or at least she thought that she was saying it. In fact, what managers could hear was “a c*nt”.

Believe me, they were very composed considering the fact that every 2 min my colleague was saying something along the lines – “a c*nt of one of the customers had to be closed/opened/verified”.

Think about it. It would be weird if every time you bumped your toe against the cupboard, you said “oh, it hurts, and I’m so angry right now!” instead of hearty “that motherf*cker!”.

Intense feelings can be expressed and emphasized much more effectively with help of swearing.

How many times have you met a native speaker of some other language and asked him to teach you some cuss words?

What’s more, it’s also funny for the native speaker. Hearing somebody saying curse words with a funny accent in their native tongue can be really hilarious!

3) It deepens the comprehension of the language, the culture, and the people.

Once you understand why they say the things they say, the language becomes much clearer. Read more about benefits of language learning here.

4) It can improve your memory

Such a language carries a huge emotional load. And I will show you how you can use it to boost your memory.

How Swearing Works In The Brain

But before I share some of the techniques I use, let me explain why swearing can be a powerful learning tool.

Neuroscientists from Weill Medical College of Cornell University found that the amygdala, which is responsible for processing emotion and memory, was highly active when exposed to swear words.

What’s important for us, the amygdala is also connected to the memory function part of the brain.

The bad news is that the repetition decreases its activity. The more you swear, the less active this part is. That’s why some people never seem to be bothered by such a language!

How To Use Swearing In Language Learning

Below, you can find three techniques which I use quite frequently.

Learn swear words and dirty expressions from your target language

I know – duh. But I rush to explain why.
Many cuss words and dirty expressions contain every-day words. Once you realize this, you’ll be able to fish them out and memorize them almost instantaneously.

I’ll give you just one example so you get a general idea since I feel weird enough writing this article!

Imagine that you just started learning English and you come across the following phrase – “go f*ck yourself”. Once somebody explains its meaning to you, it’ll be hard to forget it. And besides the omnipresent “f*ck” you learn another useful word “go”.

If you are wondering, where you can learn some frequently used curse words in your target language, read on.

You already know them. You are also aware of the emotions which are associated with them.
Of course, most of the time such translations won’t make much sense. However, that’s beside the point. This technique is only meant to help you learn new words with bigger ease.

“I will tear you a new a**hole” translated into any language will almost certainly sound absurd. But you will learn how to say “tear” in your target language!

Get creative and abuse your virtual opponent

This technique allows you to vent and learn at the same time! Imagine the person you dislike/hate/ despise sitting right in front of you. How would you abuse him/her in a creative way? You don’t even need to use a very vulgar language!

“I fart in your general direction. Your mother was a hamster!”. You get the idea.

Basically, you can take any two words from your target language and try to turn them into a creative insult.

Write the short story in your target language

Think about some unpleasant situation and try to write a short story about. Throw in an obscene word and spicy comparisons every now and then.

“The night was dark as a truckload of a**holes when I …”.

There are only two websites worth recommending

The best website of this kind which you will find. It contains swear words from dozens upon dozens of languages. What’s more, it also has a voting system to make sure that the listed swear words are in use.

They even have “a word of the day” if you needed more reasons to visit this website! 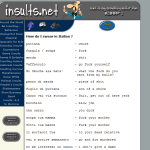 Not as good as the previous website but you still might find it useful. It contains swear words from over 40 languages. The number of obscene expressions is usually quite small but their translations are very reliable.

Be Careful With Swearing

Finally, as a word of caution – don’t try to use swear words in your target language without consulting them with native speakers.

As language learners, we usually lack a significant part of the emotional programming necessary to feel the emotion behind the words, how they affect others, and the proper context to use them.

We weren’t conditioned from a very young age to feel their emotional effect. And that’s why better tread lightly my friend. And good luck!