Life is a long fall from the womb to the grave. On our way down we get our solid share of problems to solve. Some are petty. Some are not. But the latter will batter and bruise you if you don’t take care of them.

I really hope you don’t. Like I did for a long time. I was like a retarded chimpanzee who tried to lick his finger and put it in a keyhole. But to no one’s surprise, that never worked.

“Insanity: doing the same thing over and over again and expecting different results.” – Albert Einstein

Because that’s the thing about repeating some actions (no matter how stupid they are!) for the long period of time – it’s hard to break the vicious circle. I guess that the helmet crumbles away after 10th or 20th time. And then you just keep on hitting the same wall with your bare head.

Until you suffer head trauma. Serious enough to actually convince you that it DOES make sense.
But it doesn’t.

It’s simple, elegant. And it has the power to transform you into the problem-solving beast.

It’s often described as a pure accident. But was it really? How many other brilliant scientists would have paid attention to this “incident?”.
Not many, I guess.

You have to really set your mind on a question or a problem to deserve your “Eureka” moment.

Write down the problem you’re having on the left.
The right side is reserved for potential solutions or ideas.

That’s why, try to come up with as many of them as it’s only possible. Don’t hold back.

It’s worth mentioning that sometimes ideas which (seemingly) have nothing to do with each other can turn into a breath-taking answer to your problems!

Just choose the number of random words you would like to see and click the “generate” button.
And BAM! Magic happens! Ideas!

Treat these websites as your birdbrained buddy. He doesn’t know exactly what you want but he wants to help. So he feeds you some ideas to play with. Let’s take a look at the screen-shots to see what I mean. 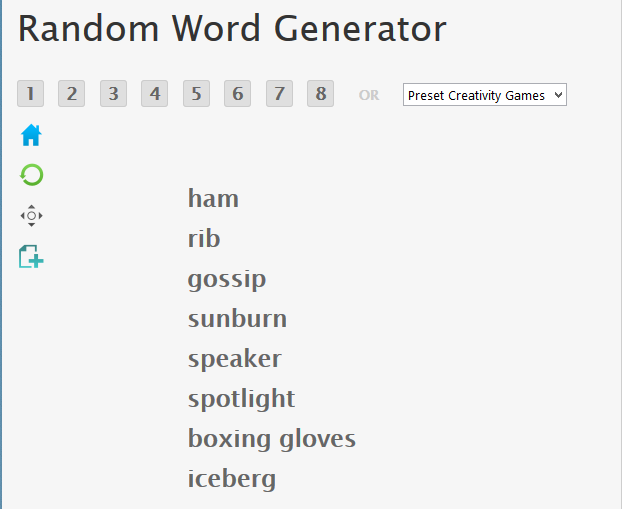 It might look meaningless. But is it? Let’s move to some practical application.

Problem – You Want To Design An Extraordinary Lamp

Of course, you would like to come up with some (relatively) fresh design. But you just keep looking at the damn piece of paper with a blank expression on your face. Frustration sticks out its ugly head. Anger overcomes you. Damn you Muses! But before you break something, let’s use some of the words from the random word generator.

rib – I guess it would look cool if instead of a normal, boring lamp, you could have something skeleton-related. Maybe a skull impaled on a spike? Oh, and the switch button can be hidden inside an eye socket! Since we are at it, why not design the entire line of gruesome lamps?!

speaker – why not connect the speaker with a lamp? It might look cool! And will be useful as well!

iceberg and spotlight – I can’t help but combine them in my head. The result is a light house.
Don’t ask me why. Anyway, the lighthouse as a lamp sounds quite interesting. Doesn’t it?

Another part of the effective problem solving is testing your assumptions. It’s great to have some hypotheses. But how can you be sure that your solution will work?

Being truly creative requires showing up day by day. Yes, it will be frustrating. Yes, it will be messy. But however frustrated you might get, don’t forget that there is a pot of gold at the end of this story (you can read more about doing the work that matters here).

What you know doesn’t mean a damn thing.

It’s the things you do consistently that really count!

If you don’t know how to push yourself to do it, read how to triple your productivity overnight with one simple strategy!