We've all heard that practice makes perfect. It takes time and effort to be great at something, and if you want to do it right, you should practice one skill at a time.

For example, a beginning guitarist might rehearse scales before chords. A young tennis player practices the forehand before the backhand.

This phenomenon is called “blocking,” and because it appeals to common sense and is easy to schedule, blocking is dominant in schools, training programs, and other settings.

However, the question we should be asking ourselves is this: is blocking the most optimal way to practice skills? It doesn't seem so.

Interestingly, there is a much better strategy - enter "interleaving".

In interleaving one mixes, or interleaves, practice on several related skills together. In other words, instead of going AAAAABBBBBCCCCC you do ABCABCABCABC. 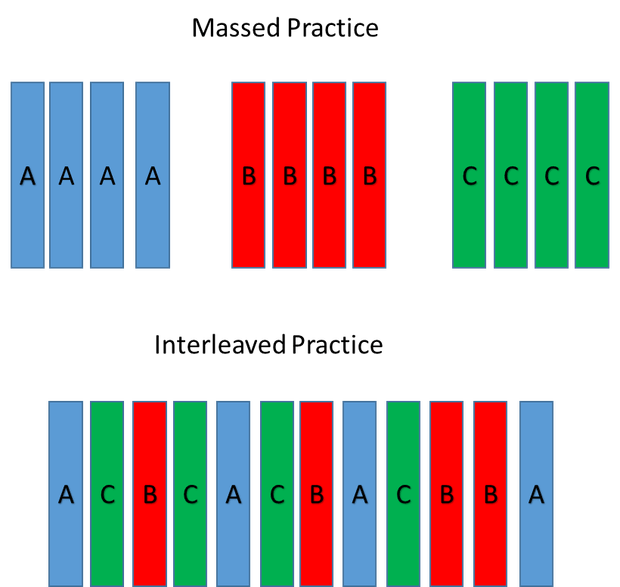 It turns out that varying it even slightly can yield massive gains in a short period.

Let's take baseball as an example: Batters who do batting practice with a mix of fastballs, change-ups, and curveballs hit for a higher average. The interleaving is more effective because when you're out there in the wild, you need first to discern what kind of problem you're facing before you can start to find a solution, like a ball coming from a pitcher's hand.

Read more: A Simple Learning Plan To Get The Most Out Of Your Study Time.

There are almost no strategies that are fully universal and can be used for all disciplines and in all learning conditions. The same goes for interleaved practice.

The past four decades definitely demonstrated that interleaving often outperforms blocking for a variety of subjects, but especially motor learning (e.g., sports).  The results for other subjects are mixed.

For example, when native English speakers used the strategy to learn an entirely unfamiliar language (i.e., generating English-to-Swahili translations), the results were better, the same, or worse than after blocking.

During the experiment, some kids were taught math the traditional way. They got familiar with one mathematical technique in a lesson and then practiced it to death. A second group was given assignments that included questions necessitating the use of different techniques.

The results were as impressive as they were surprising.

Keep in mind that such an increase is truly amazing, given that both groups had been learning for the same amount of time. The only difference was that some students learned block by block, and others had their learning mixed up.

Read more: How To Master Many Fields Of Knowledge - Your Action Plan And Recommended Strategies.

The necessary condition before you apply interleaved practice

The results above tell us one important thing. You can't just go cowabunga and start interleaving the heck out of every subject.

Before you do so, you should have some familiarity with subject materials (or the materials should be quickly or easily understood).  Otherwise, as appears to be the case for foreign languages, interleaving can sometimes be more confusing than helpful.

It's only logical when you look at this strategy from the memory perspective. For many, using even one technique seems to a burden enough for their working memory. Forcing such people to use three or more make you a psycho who wants to see the world, and their memory, burn.

It's simply too much.

It doesn't take away from the fact that interleaving can be extremely useful. It forces the mind to work harder and to keep searching and reaching for solutions.

However, if you decide to use it, make sure that you're familiar with the strategies you want to interleave. This recommendation is based on a phenomenon called the expertise reversal.

The expertise reversal effect occurs when the instruction that is effective for novice learners is ineffective or even counterproductive for more expert learners.

Why might lower variability be better in the beginning?

What does it tell us?

We can't play in the big boy's league if we don't cover the basics!

Read more: The Curse of the Hamster Wheel of Knowledge – Why Becoming a Real Expert Is Very Difficult.

(1) Interleaved practice is perfect for:

(2) For more complicated subjects, make sure to familiarize yourself with the appropriate strategies before you decide to interleave them. This way, you will make sure that your working memory isn't overburdened.

I am on the mission to change it. I have created over 11 flashcards that you can download to truly learn information from this article. It’s enough to download ANKI, and you’re good to go. This way, you will be able to speed up your learning in a more impactful way.